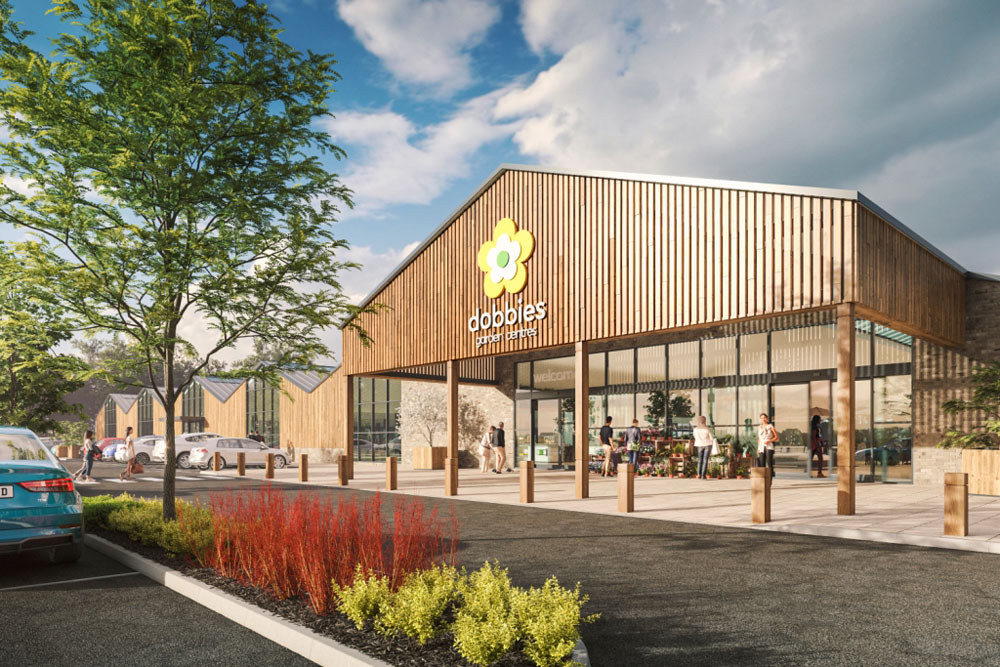 Dobbies Garden Centres, the leading garden centre operator in the United Kingdom, has signed an agreement to lease with Cheltenham-based developer Robert Hitchins Ltd to open a 75,000ft2 flagship garden centre. The new store, to be built at junction 9 of the M5 near Tewkesbury in Gloucestershire, will be the largest Dobbies in South West England. The garden centre, on a greenfield site fronting the A46 trunk road, will feature the very best of Dobbies.

When fully open, visitors to Dobbies will be drawn through the store entrance by the visual appeal and aroma of house plants. The store will feature a large food hall with on-site bakery, butchery and an eye-catching ambient grocery offer, including fresh fruit and vegetables. Additional attractions include a 500-seat table service restaurant with an extensive menu, cookshop building on an award-winning format, a pet department plus an extensive plant area with a wide range of plants for all seasons.

It will be on the same overall 180-acre site as the proposed 195,000ft2 Designer Outlet Cotswolds which will feature some 90 retail units, restaurants and cafés. Detailed negotiations are under way with a number of high-quality retail brands that have been attracted by Designer Outlet Cotswolds’ strong location and communications links and its affluent and growing catchment. The outlet village will feature aspirational brands across fashion, athleisure, footwear and lifestyle at up to 70% off RRP throughout the year along with quality restaurants and coffee shops.

Robert Hitchins Ltd and leading European outlet operating company ROS Retail Outlet Shopping are developing a Designer Outlet Cotswolds to be built at junction 9 of the M5 motorway. The 195,000ft2 outlet village will be opened in two phases and will feature some 90 retail units, restaurants and cafes. Construction is due to start on site in autumn 2020 with the first phase expected to open towards with end of 2021.

The Designer Outlet Cotswolds will create one of the most accessible retail and leisure destinations in the UK. As well as the nearby M5 motorway, the site fronts the A46 trunk road which links to the M42. More than 21 million vehicles pass the site each year and the development is within walking distance of the Ashchurch-for-Tewkesbury railway station which serves the Bristol to Birmingham main line.

Additionally, more than 9.8 million people live within a 90 minutes’ drive and the Cotswolds Area of Outstanding Natural Beauty (AONB) attracts over 23 million visitors annually. Infrastructure works to open up the site for development are due to commence in Autumn 2020 with the garden centre and outlet village planned to open in Autumn 2022.